It starts in a thrift store. It always does.

I was over the MOON when I received an invitation to Wild Wild West Con in Tucson, Arizona! A previous visit a few years ago was cut short, and I had despaired of ever having the opportunity to attend WWWC again. So after my hard and enthusiastic ‘YES!’, I realized that I wanted to bring a unique costume project, especially aimed at the 2020 theme, “Mystery & Magic”. As a slow builder, this felt impossible, but also important. As usual, I turned to what I’ve collected from thrifts and other resources. And lo, a Tarot/Astrology themed shower curtain emerges like magic.

Starting with the fabric shower curtain featuring major arcana tarot cards from the Rider-Waite deck, I scoured the thrift for garment shapes that could cobble together for a whole ensemble. Inspired by a Regency-era silhouette (high waists, long riding coats, turbans and shakos), I had most of what I needed to build a costume that would communicate ‘Magic & Mystery’.  But, damn, it was tight getting it all together in 30 days. Especially with my limited skill set. So much glue was used. So much.

(The costume project is named Baba Divina, in a nod to the blind Bulgarian mystic Baba Vanga. )

For a deeper dive into how the Tarot Card costume came together, I posted the day-by-day process in a single album on my CostumeArt Facebook Page, which can be found here:

As usual, I didn’t try the whole thing on until I arrived in Tucson. But other than a few small adjustments, Baba Divina ended up being one of the easiest costumes to don and wear. (READ: I’m going to wear this costume a LOT.)

Here are a few images from outstanding photographers in Tucson who were kind enough to share their talents toward capturing the finished project. (Thank you!) 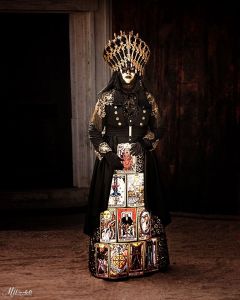 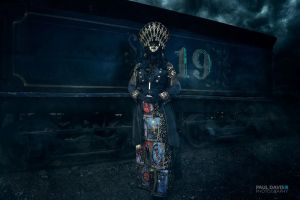 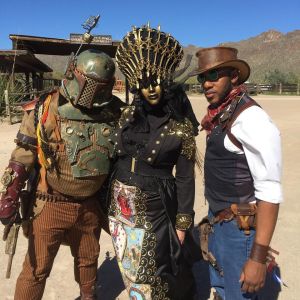 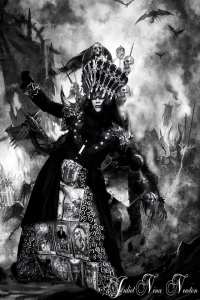 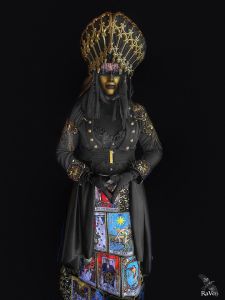