It’s a natural thing for fans of books, movies, comics, television shows and more to gravitate toward each other – especially via social media – to share their passion, their fandom, for the entertainment that means something special to them. Some fandoms are huge and well-known,  others are more esoteric, but just as enthusiastic when it comes to their media jam.

There’s no secret that I’m a dedicated fan of Robert Jordan’s “Wheel of Time” book series. I have a personal history with the books that became a touchstone for two decades of my life. I’ve celebrated my fandom through WOT cosplay, as well as trips to JordanCon and other WOT-related events. And I totally get that the books aren’t everyone’s cup of tea. But that doesn’t diminish MY enthusiasm for the literary world that Jordan (with later support for Brandon Sanderson) crafted. And I’m not alone. 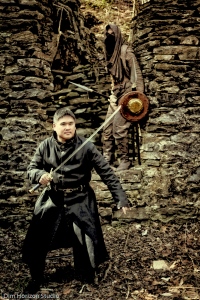 There’s other people who feel the same way I do about the “Wheel of Time” (WOT for short) world. We’re not a massive army of fans that dominate the mainstream media channels, but a strong, dedicated and constant group of enthusiasts who connect at conventions, events and especially through social media. It’s a legitimate community of folks spread across the world and joined by their love of these books. We connect and communicate through various websites, forums and importantly…through the Wheel of Time group on Facebook.

On the Wheel of Time Facebook group page it’s not unusual for us to ponder which character we might like to cosplay. Yeah, we sometimes “dream cast” celebrities who could best portray characters from the books. And sure, there are sometimes spoilers for newcomers to trip over in some threads. We geek on WOT.

Sometimes we wonder who WE would be in the WOT world. And that’s okay, too.

Of course, human dynamics are present everywhere – even in a community like ours. And our corner of the social media landscape was probably overdue for trolling. None-the-less, it was disappointing to see it finally play out when one group member simply posted their own picture and asked “Who would I be in the Wheel of Time?” – and was subsequently trolled and bullied in the comments.

The page admins pulled the post. But what followed was one of the most inspiring and redemptive things I’ve ever witnessed in fandom.

In response to the earlier bullying, WOT group members began posting photos of themselves asking “Who would I be in the Wheel of Time?” with the hashtag #WOTme.

It’s important to understand that for many folks within literary fandom, posting a selfie via social media isn’t necessarily an easy thing. Putting yourself out there, asking for others to comment on how they see you – that takes some courage. What started  a trickle of group members taking the #WOTme plunge, turned into a flood of group members from every corner of the world – posting their faces and asking “Who would I be in the Wheel of Time?”.

The responses have been positively overwhelming as well. Drawing from the massive list of WOT characters, the suggestions pouring in on each photo have ranged from the series superstars to obscure bit players (and trust me, we KNOW the bit players in Wheel of Time).

And, who knew we had so many gingers among us? Those sneaky Aiel.

In one day, a group that was previously connected only through their enthusiasm for a book series, transformed into a real community, coming out from the group shadows and joining together to take a public stand against bullying. My Facebook feed is blowing up with the faces of my fellow WOT fans – and it’s kind of glorious. I think that every fandom, great or small, should pay attention what has happened today in the Wheel of Time community. It’s a testament to power of positivity within the ranks of fandom (and also illustrates how the Light really can triumph over the Dark. Sorry, I had to add that.)

I’ve never been more proud of my corner of fandom than I am today. I think Robert Jordan would be proud, too.

THEIR QUESTION: “Who would I be in the Wheel of Time?” #WOTme

MY ANSWER: “You would be awesome. Just like you are now. That’s what you’d be.”