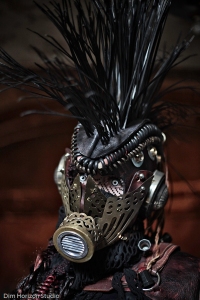 The Mohawk Headpiece for the ‘Siri’ costume was a huge learning curve. While happy with the result, the journey was fraught with errors that demanded serious improvisation.

I learned SO MUCH from my mistakes during the “Siri” build.  It was an ambitious project and my lack of crafting skills and aversion to measurement REALLY made themselves known along the way. But…I also discovered that improvisation, desperation and flexibility of vision can fill in many of those gaps.

These progress pics for the Siri costume’s headpiece really emphasize my lack of real crafting skills. Hopefully, they also highlight how flaws and mistakes can be hidden along the way; being willing to change and alter your design mid-stream is vital when you’re a mistake-maker like me.  There’s a LOT of re-purposing going on in this costume, many learn-as-you-go mistakes, and some poor planning errors, too.  Just the same, I’m happy with the end result.

Since no one is probably interested in duplicating this costume, rather than presenting it as a “how to”, the following images are intended to illustrate what kind of materials can be used for a project like this.  They may also illustrate a fair number of “what NOT to dos”.

For Siri’s “mohawk, I used an ice pick to poke 200 holes in two strips of leather.

The TWO sides allowed me to create an excess of leather on the crest of the head that compensate for the short fall of width on the mohawk pieces, rising up to meet them and giving me a place to affix the strips.

Wet leather molding is really easy – especially for folks like me who lack precision and riveting skills.

Because I got the width wrong on the mohawk strips, I had to mold the wet leather cap in TWO pieces.

Using E6000 I assembled the two mohawk strips and the two halves of the leather sides in place – using bag and pinch clips. Wrapped it all up in a stretchy scarf to dry overnight.

All the leather pieces – in addition to being glued together – are glued down to a fiberglass skullcap donated by a friend.

The phone/light cords were the perfect disguise to hide my measurement mistakes and provide support for the mohawk quills. AND it fit into the whole theme – so disaster averted!

With the new year on approach, these vintage “HAPPY NEW YEAR” postcard images deserve a second look. A double-take, really. What the actual hell was going on with New Years of yore?

Charging into the new year on the back of a beetle = goals. 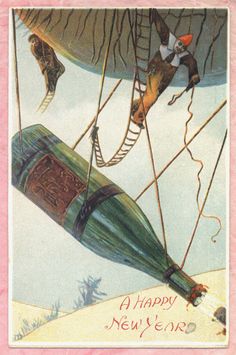 Ringing in the new year with a rain of champagne dropped from a zeppelin full of clown-apes.

Starting the New Year with a savage side-eye from your lit kid.

The gal’s four glasses in… and giving a ‘piss off’ toast to her ex. Or the previous year. Whatever. Piss off. 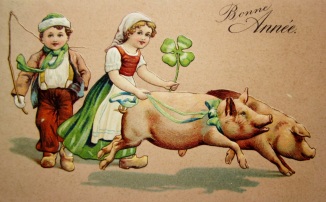 Running off the previous year’s pigs by beating them with shamrocks. 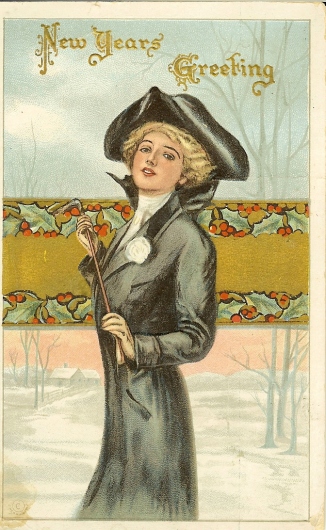 Your previous year is at an end. The new year dawns. Prepare to be disciplined. 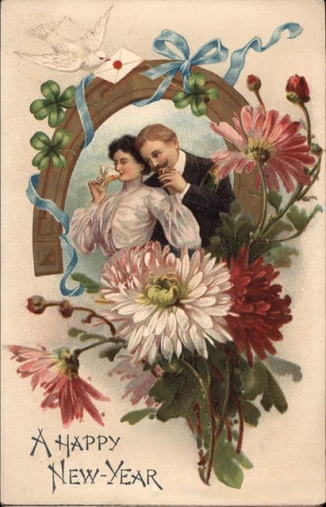 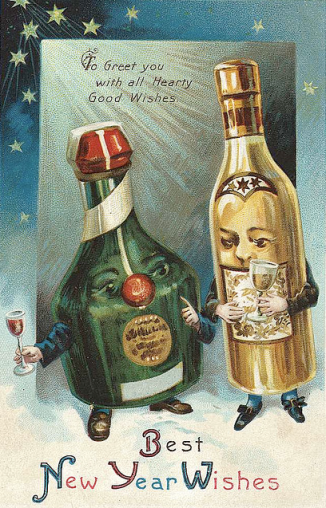 Why even send this card? Clearly the thirsty recipient would rather just have a damn bottle. Cheap ass.

A New Year Goose that spits money. Into a spittoon. Why did this go away?

Winged baby, wicked scythe, an hourglass…and something awful in the New Year box? Probably 2016 in that box. 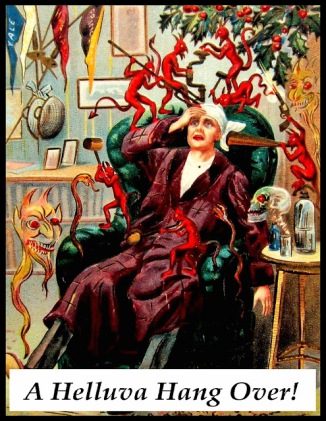 Maybe this vintage gem was sent by abstainers to put friends off their New Year’s Eve drinking plans. However, according to this postcard, the foot odor is the real demon here. 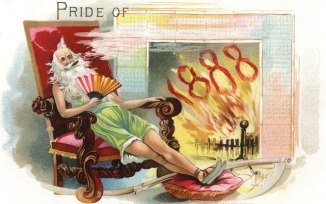 Party on, vintage people. I like your New Year’s style.